Hi my mum is on sinemet and mucuna dopa she has never had tremors but she goes stiff instead. She’s only having 2 hours in a 24 hour period where she doesn’t feel like she is being crushed and can’t breathe. Has anyone else experienced this? Any suggestions ? We’re running out of ideas .
Thanks for reading
Helen

Welcome to the forum.

I hope that our wonderful members will be able to provide some feedback, and I’ve also found two previous discussion you might fight interesting about breathing and coughing problems and shortness of breath.

We also have a free and confidential helpline with a team of amazing advisers who could provide additional support and advice. Please feel free to give them a call on 0808 800 0303 or email at [email protected].

Hi I have had pd for 13 years now and am on madopar and entacapone, and cr half sinimet. I also find I have periods where I breathe too fast, no one has been able to help. I feel that it is another symptom of late stage pd and a result of the medications wearing off,
I feel I have no alternative but to go down the surgery route now. I don’t know how long the testing will be to discover if I am likely to be a good candidate but hope it is soon. I will continue to contact the team on a weekly basis but Covid has wreaked havoc with the waiting lists for surgery.
I don’t know what stage you mum is at, has she seen the pd nurse or her neurologist?

She pays private for a specialist who’s “run out of ideas” and she doesn’t have a nurse . There’s been no suggestion of surgery.
Shes had PD for 10 years now but has never really found something that works .
I hope yr surgery comes round quick and is successful for you . Be great to know if it is .

Hi Helen, I’ve had PD for 12+ years now and am currently experiencing similar symptoms. Additionally, I get lightheaded as well. This has been occurring for over 1.5 years and started quite suddenly. Good news is my neurologist is now thinking it may be postural hypotension which is common with PD and related to blood pressure. I have done a blood pressure monitoring exercise which supports this.

Perhaps this can be suggested to your Mum’s GP and they can run some tests. In the meantime, it will probably be suggested to be sure she is drinking plenty of water (dehydration), getting adequate salt intake, and try wearing compression stockings (like the ones given with operations). It might help ease some of the discomfort.

Hope this helps. All the best, MAnnie

Hi again I read today that shallow rapid breathing is a symptom that often goes undiagnosed in Parkinson’s.
It is a common side effect of the ‘Wearing off’ phenomena, brought on in pd sufferers who have been using levodopa for some years and it has reached its peak effectiveness. In addition there is a condition called respiratory dyskinesia that causes rapid and irregular breathing, when levodopa medication has worn off.
I have been doing breathing exercises and stimulating the vagus nerve which although isn’t giving lasting relief, it is easing the rapid breathing. I am hoping more practise will help extent the period of relief I get.
Anxiety is also something experienced as a ‘wearing off’ symptom and medication can help. I would ask your Gp or neurologist to refer you to a neuropsychologist who can recommend some treatment that will help.

Sorry to hear that your mum is having to deal with this. Breathing problems are scary.

I have had PD 8 1/2 years and am also the stiff, tremorless type (bradykinesia-dominant).
I have experienced a lot of the breathing problems mentioned in this thread. I learn something new about them almost daily.

Things that have helped are -

I hope your mum can find some relief from what I call the “dark forces” soon!
Sheryll

My movement disorder started Feb 02 with muscles spasms around my eyes. Much later I worked out that this was a few months after taking an antiemetic domperidone for migraine with vomiting.
My breathing was first affected 8/02 a few months aFTER BEING given antidepressants. I described it as in ‘shorts paNTs’. It was scary & uncomfortable. I felt as if there was a steel band around my throat – my gp assumed I was having anxiety/panic attack. I thought it was more muscle spasms affecting my breathing and that made me anxious. Gp wrote to neurologist describing tight neck & shortness of breath.
Dec.02 neurologist prescribed neuroleptic Sulpiride
Then my gp prescribed another antidepressant Dothiepin for I had pain in my mouth
then 4/03 neurologist prescribes antiparkinson drug Benzhenxol
Then another very scary episode.
26/8/03 I wrote to neurologist describing pain in my chest ” which I believe to be stiffness in the muscles caused by the spasms…the pain was making it difficult for me to move around the house without discomfort”

I haven’t taken any drugs since 2004 when I began - slowly - to find out about drug-induced movement disorders.
These days my breathing feels pretty shallow & uncoordinated when I’m doing yoga but it’s hard to concentrate on improving it when I’m struggling to control the rest of my body. It doesn’t feel quite right either when I’m cycling but hopefully it’s good for the lung muscles to be exerting myself.

Some references which may be useful:

In his 1817 essay “An Essay on the Shaking Palsy”, James Parkinson made the first observation, “he fetched his breath rather hard,” related to the respiratory problems involved in the systemic symptoms of Parkinson’s disease.

People with Parkinson’s disease (PD) can have dyspnea at any stage of the disease. Dyspnea (a subjective experience of breathing discomfort) .
The frequency of reported breathing discomfort in PD ranges between 11.5% and 40%.
It is more frequent in PD patients with motor and nonmotor fluctuations5 and is mainly reported in the off drug condition.
From our point of view, an item “dyspnea” should be added both to the questionnaires of NMS and in part 1 of an adequately revised MDS-UPDRS. Thus, its frequency and burden could be properly assessed.

Development of a Non-Motor Fluctuation Assessment Instrument for Parkinson... 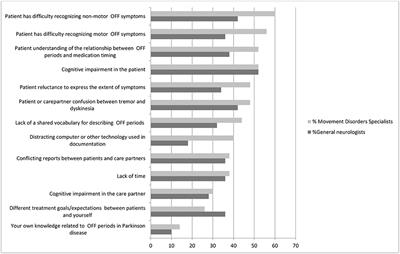 Communication About OFF Periods in Parkinson's Disease: A Survey of...

Background: OFF periods impair quality of life in Parkinson's disease and are often amenable to treatment. Optimal treatment decisions rely on effective communication between physicians, patients and carepartners regarding this highly variable and...


Communication About OFF Periods in Parkinson’s Disease: A Survey of Physicians, Patients, and Carepartners T.Rastgardani, M.J. Armstrong, A. R. Gagliardi, A.Grabovsky and C.Marras Front. Neurol., 19 August 2019

The barriers most commonly cited as major by patients were that they perceived OFF periods to be part of the disease (i.e., not a clinical aspect that could be improved by a physician), variability of symptoms, and difficulty in describing symptoms.

Crushed… that rings a horrible bell. I’m very sorry to read this as it’s utterly dreadful. I am not sure if your mum cannot breathe or FEELS like she cannot breathe because she feels like she is being crushed. My partner went through the crushing symptom – but note that it is went through, not still going through.

It appeared to be the result of wearing off and it started happening quite quickly. My partner was on sinemet, sinemet CR, Ropinirole, amantadine and amitriptylene at night. The sinemet was going off quickly, dropping my partner into a deep hole. This was fixed by replacing the Ropinirole with a Rotigotine patch, which maintained a low but effective dose of a dopamine agonist all day so my partner no longer fell into such a deep hole when the sinemet wore off. It took some time to get it prescribed, a few agonising days, and then another week or so to get the dose right. It worked. It has since been joined by DBS and my partner no longer slumps into such an agonising state. I hope your mum can get this sorted. I wish her the very best.